Myths and History of Favors 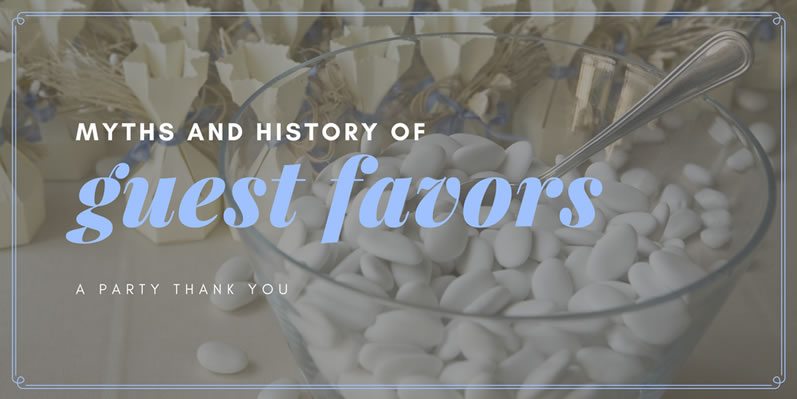 Myths and History of Favors

Selecting the perfect favor can be challenging! Take a look back at some common myths and the history of favors to inspire you.

Myth #2 – You have to give every guest a favor.
If you want to give out favors, you can give them to individual, couples, or even families. In fact, you don’t have to give favors at all! While they are thoughtful, if your budget is tight, they are the first place you can easily cut back on or eliminate.

Looking back on the history of favors around the world and through time presents us with two major themes. The first being that favors represented a sharing of good luck, fortune, or wishes. The second being a way to thank guests for attending the event.

It is thought that Italy and France started the tradition of giving bonbonnieres(French)/bomboniere(Italian), or favors as they are known today, at weddings and other occasions. The original favors were intricate or jeweled boxes filled with sugar cubes, since sugar was very expensive and enjoyed only by the wealthy, and evolved into sugared almonds (Jordan almonds) and then other candies and gifts over time. People in Italy, Greece, and the Middle East favored the giving of five Jordan almonds representing fertility, health, wealth, happiness, and longevity in the marriage. The symbolism of the five wishes was also carried over to the giving of other sweets by the Dutch. Marzipan fruits and chocolate covered almonds are also popular favors in Italy. Malaysia guests received hand-painted, decorated eggs as favors. Victorians gave rosemary as a symbol of remembrance to let each guest know that they were special and would never be forgotten. Finally, in the late 1800’s in the United States, guests were given picnic baskets filled with a lunch or a loaf of bread and a jar of jam to eat on their long journey home by wagon.

This site uses Akismet to reduce spam. Learn how your comment data is processed.

Page load link
This website uses cookies and third-party services. Our partners will collect data and use cookies for ad personalization and measurement. Learn how I Do Still and our 10 partners collect and use data. Click Yes to give your consent or leave the site to opt out. Settings Yes