The Ultimate Guide to Vow Renewals 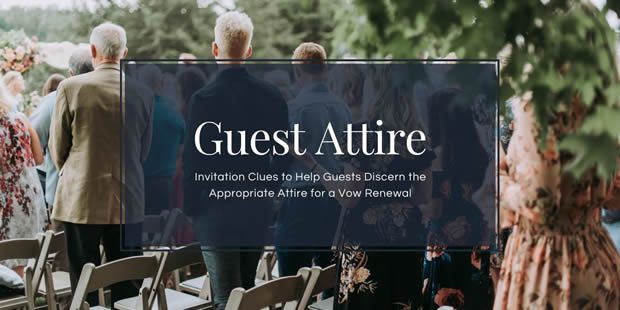 Invitations often don’t include details on the appropriate dress code of guests today. There are ways to discern the preferred attire from the details of the invitation itself, however.

Invitations set the stage for the look and feel of the celebration you’ll be attending. They communicate what to expect, from attire to the overall atmosphere of the vow renewal. Elements such as the wording, font choices, and colors provide clues on how to dress when it’s not spelled out.

How an invitation is packaged is the first clue to discerning the style of a vow renewal.

Formal: When you receive a formal invitation, it is often immediately apparent due to its weight or thickness. Elements such as a wax seal, layered envelopes, calligraphy on inner or outer envelopes, or a personalized belly band suggest a more formal affair. The paper the invitation is printed on will also be reasonably heavyweight and have a nice finish to it. You can also expect to see inserts with a formal style.

Casual: In the same way, the invitation tends to be lighter weight overall. There is often only a single envelope layer, and it may be colorful and have a fun liner. Inserts will be minimal and more casual in style as well. It’s common to see infographic details and requests to RSVP by email rather than the use of response cards.

The graphic design elements used on the invitation provide guests with clues to the style and feel of the vow renewal.

Casual: Casual invitations tend to be more colorful overall and include more casual graphic elements. Some examples include waves, shells, and starfish for a beach vow renewal, a watercolor floral border or butterflies for a garden vow renewal, a twinkle light border for a backyard vow renewal, wood-textured background for a rustic barn vow renewal, or cocktail graphics or a metallic border for a cocktail reception.

Formal: Expect to see fine print options, such as engraving, letterpress, or gold foil on the invitation.

Formal: Invitations featuring calligraphy, text in a single font, and text in all capital letters all indicate a formal vow renewal.

Formal: A black-tie or other formal invitation will use more traditional phrasing on your invitation. The request line will be worded along the lines of ‘request the honor of your presence’ or ‘request the pleasure of your company.’

Casual: An invitation for a more casual vow renewal will be worded with something like ‘join us’ or ‘happily invite you…’

Formal: If the vow renewal starts after six in the evening, guests can expect that the celebration is more formal unless you have indicated otherwise.

Casual: Vow renewals held earlier in the day are less formal.  Garden or cocktail attire would be safe options.

The Ultimate Guide to Vow Renewals

Your Source for Vow Renewals, Renewing Your Vows, Recommitment Ceremony, Reaffirmation of Vows, Renewal of Vows, or Whatever You’d Prefer to Call Your Celebration of Your Marriage!

Page load link
This website uses cookies and third-party services. Our partners will collect data and use cookies for ad personalization and measurement. Learn how I Do Still and our partners collect and use data. Click Yes to give your consent or leave the site to opt out. Settings Yes